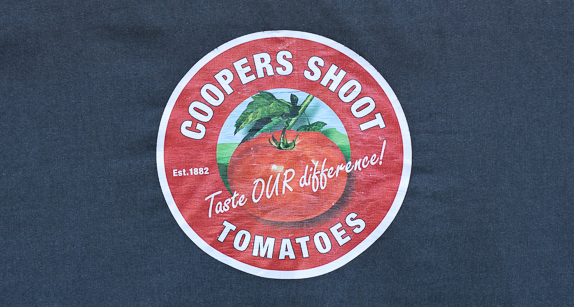 Email - This email address is being protected from spambots. You need JavaScript enabled to view it.

The Coopers Shoot property has been in the Armstrong family since 1882. Nestled in the hills between Byron Bay and Bangalow in northern New South Wales,Australia, Originally the property was set up as a dairy operation supplying butter to England and cream to the nearby Norco milk factory. As the dairy industry waned in the 1960`s, production switched to beef on their 200 acres of rolling pasture. Hugh and Heather, the 5th generation of thier family started managing the property in 1998 and introduced horticultural production into the farming operations.

In 2002, the Byron Bay farmers market commenced operations, and this saw the Armstrong`s switch to soley selling there fresh vegetables at local produce market. This gave them the opportunity to interact with there cosumers directly. Coopers Shoot Tomatoes grows a selection of gourmet vine ripened tomatoes, leading the way at the markets for taste, variety and flavour.
Hence out Slogan "Taste The Difference".
We grow a range of Tomatoe varieties including;

Gourmet Truss - Our most popular variety, a versitile tomatoes great for salads and cooking.

Beefsteak - with a pink Fleshy texture this tomatoes comes from the heirloom varietys. It works well cut into thick steaks and served on burgers. Expect a succulent, delicious flavour !!

Oxheart - A rich, ruby red variety that is full of flavour.

Montenegro (Green Spansih Tomatoe) - Eat this one green ! Crispy like an apple, Drissle with olive oil and sprinkle salt and pepper. Yum !

Conchitta - Our Truss Cherry Tomatoes !! Sweet and bite size, Eat them as a snack straight of the vine or roast them whole for bursts of flavour.

We are continually planting new varieties to add to the allready large selection of delicious tomatoes. The best way to discover all these little treats is come and see us at one of the local farmers markets. Byron Bay, Bangalow, Mullumbimby, New Brighten and Lismore (Magellan St)